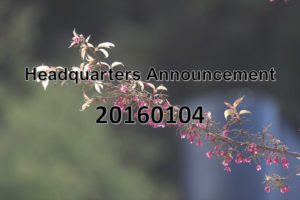 Some people asked: Would the master presiding over the test intentionally give some people who only pass the test for lower levels the robe and certification of a higher level? Can the attire truly ascertain someone’s level for 100%? This kind of inquiry is due to not understanding the rules and the test and the live situation at the test site. You should know that the holy and virtuous gurus’ Buddha Dharma at the headquarters is not like what those who have not obtained authentic transmissions and could only talk in empty theories and unrealizable dharma have. It is the Buddha Dharma truly transmitted from Shakyamuni Buddha and can manifest itself in a holy state in which its form is real and tangible.

Everyone taking the test, when going into the Array, must chant authentic Buddhist sutras such as Diamond Sutra, Shurangama Mantra, the Great Compassion Dharani, Mahakala Mantra, and so on. True Dharmas in Buddhism involve complete application in the three karmas—mind, body, and words. Take the Diamond Sutra, for example. Besides chanting the sutra text by mouth, visualizing the meaning in mind, a hand mudra such as the Mudra of Buddha Imparting Dharma or the Mudra of Ven. Subhuti must also be used as a compliment. Otherwise, the divine prowess of the Diamond Sutra is not perfect, and no real, tangible form of holy state can be revealed.

The seven holy beings and the ten gurus (who proctor the test) must also chant with the person taking the test and apply the mudra. The Holy Test has no loophole, especially when there are the seven holy beings and the ten gurus present, who have all made solemn vows to guarantee the level obtained as a result of the Holy Test by every test candidate is correct. Should there be any falsehood, even if just one or two people who are falsifying the outcome, would it be possible that all seventeen on-site proctors who are holy beings or great virtuous gurus falsify the result? Would they all dare to make solemn vows and write down their vows and endorsement of the outcome on the certification of the level obtained by the person taking the test? Not to mention in the site of the holy test, besides the seventeen witnesses, many other people are also taking the test. The rules of the test site say the first person must have finished his or her examination before the second person can go take the test. All those who have not yet received the test, as well as all those who have completed the test, stay and watch on the side. Every person taking the test can see in person and on-site what everyone else’s actual condition is in the test, and what their level is. Think about it. Who would want to get a low level from the test? You can say that everyone wants to get a high level.

The test candidates are in the same holy test array, and the Safety and Auspice Region (平安吉界) is right in front of them. The green Auspice Region is extensive and broad, but only if you can go into it can you pass for the level. If you cannot get in, then you don’t have the level. When the test candidates were practicing it before the formal holy test, everyone could walk in and out of it at will. But once the announcement was made that the test was formally starting, some candidates couldn’t go in any longer. There was not a single trap or preventative mechanism in the entire Array. Still, if you do not have that one extra bit of true Buddha Dharma capability, it is impossible to go into the Auspice Region for just one single time!

Besides, the level every test candidate got from the holy test is 100% identical to the divination which they had drawn in private by themselves. Therefore, the candidates who have taken the test are all convinced entirely for what the levels they obtained. Some could only watch others getting Level 3 but was unable to get even Level 1 themselves under the watch of everyone. It is imaginable how hard they must have felt.

But if one’s dharma capability is short, then one can never go into that flat and clearly-seen green-colored Auspice Region in the center. Even though you are moving your feet to go forward to the green zone in the front, but the more you walk forward, the more the feet move backward naturally, until you finally fall on the ground. Once a candidate could not go into the Auspice Region, he or she would definitely be pushed into the Samsara Eight-Wind Array (輪迴八風陣) and fall on the ground in the big Array. That candidate would lose face in public. They would have to be rescued out of the Array, taken by hands and feet, by the four great guardians. Which master would want to embarrass themselves with such a miserable sight in public?

No matter how a pompous master brags about themselves, they would not get by when they come to the test array. They cannot pass it unless they have real substance in their dharma powers. The buttons to be born on the robes and the certificates, which this Headquarters issues, are guaranteed by the holy test as well as the seventeen proctoring gurus on site of the Holy Test who have made solemn vows. They are nothing but genuine and real! Therefore, Buddhist cultivators and disciples must check the attire bearing the buttons and the certificate of a master, lest mistaking an evil teacher or a cheater for a good guru. We reiterate that even the Greatly Holy and Virtuous Wangzha Shangzun, who presides over the mandala of the holy test, Dharma King Gar Tongstan, or Kaichu Ruzun, cannot influence the candidates’ test results and levels.

There are two couplets and a horizontal banner in front of the holy test array. They can very well describe the situation. The horizontal banner says: “The result from true Dharma match what is revealed in the holy divination, the rules are abided by to verify the result where no favor is considered; the dharma guarding deities for the holy test are responsible for their own causality, while the fundamental guru presiding over the mandala is not responsible for the causality.” The long couplet says: “What is true cannot be made false, in which case moving Mt. Taishan is as easy as moving a plate;” and “What is false cannot be made true, and getting a test result higher than what you are is harder than climbing the sky.” And the short couplet says: “Your level revealed is what your level is exactly, so do not think your level would be any higher;” and “Your weight shown will be whatever you weigh, so there is no way you can add weight.” The picture of the gate of the holy test array is shown below.

This announcement is now made.