Announcement No. 20160102: The definitive sense of the level from the test and the robe that indicate one’s Dharma capability and accomplishment 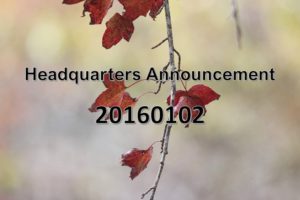 To protect Buddhist disciples from falling prey to deceit and lies, it is decreed that the master, whom Buddhist disciples prostrate themselves to, must take the test to determine their status. The test tells whether they are holy or ordinary and what level of accomplishment they have attained. The test result is given per the Dharma rather than the person; It is based on the definitive meaning, not the provisional meaning. No matter how high the status a Buddhist holy person is, it only counts if they have taken the test. If they dare not take the test, it proves that there are severe problems with that master, whom you must not trust even if their fame is higher than the sky.

Unless being determined by the exam, no matter what a venerable, dharma king or a certified reincarnated rinpoche one professes to be is not trustable. Additionally, a person can gain or recede according to whether their cultivation is good or bad before reaching the stage of a non-retrograde Bodhisattva. Consequently, they don’t have the definitive status of accomplishment, even if they may have the nirvana path-fruit (泥丸道果), had their crown opened deep and wide via the Vajra Change-body Zen (金剛換體禪), can show the Tummo Samadhi (拙火三昧) power, can have their consciousness exit the body, or can practice a Dharma to invite a Bodhisattva to manifest holiness and empower the disciples.

The Vajra Faman Selection Dharma (金剛法曼擇決), the Knowing in Advance and Foretelling Dharma (先知預言), or the Selection From One Hundred Dharma Bright Gates in Total Darkness Dharma (百法明門黑關擇決) must be performed to verify a master’s status and realization capability with 100% certainty. Otherwise, that master must have passed the test through the Vajra Array or the Eight-wind Array to get the corresponding level and the robe.

Unless that master can prove themselves by showing the even higher Dharma ability to Establish Mandala Through A Stone Slab (隔石建壇), or by being able to perform the Holy Inner-tantric Initiation, where the disciple holds a Vajra Ball that is as big as a pea in their hand and the master stands five meters away from the disciple. The master practices the Dharma to make the Vajra Ball in the hands of the disciple go through a holy transformation or dance. Any other miraculously manifested phenomenon is not a component of divine accomplishment. But to concretely tell the master’s level of capability, their level from the test and the robe must be checked for confirmation. Only then can their level of ability be known. The following are the details to ascertain the real status of a master definitively:

But all the masters taking the test must especially clearly understand that the headquarters has detailed records of everyone who comes to take the test for people to check. The Holy Test Inquiry Team will tell your test results factually to whoever is inquiring but will not expose your score from the written test on the Sutra, Vinaya, and Sustra. We will reply with how many times you have taken the test, and in each time which item you receive the test as well as what level you obtained, whether or not you were engulfed in the Samsara Black Region (輪迴黑界), whether you were unable to enter the Safe and Auspicious Region (平安吉界) that was right in front of you and fell to the ground or as soon as you had entered the Safe and Auspicious Region, you were pushed out of it by the eight winds, and whether you fell to the ground unconsciously and your flesh was hauled out by the four great guardians, but you recovered to safety by the master presiding over the mandala who practiced Dharma to save you.

Except for the robe a master wears, the United International World Buddhism Association Headquarters also issue a Certificate of Level that corresponds to the attire to the master who has achieved the level. If you find that the level and the certificate don’t match, then the robe the master wears is an act of falsehood and lying.

Additionally, we solemnly inform you that this holy and virtuous team will guarantee, with holy and virtuous righteousness, to everyone who calls or emails to inquire with us. We will keep the secret for you and will not reveal which master you are inquiring about or have inquired about.

This public announcement is now published.