Announcement 20160107: Wangzha Shangzun asserts the qualification to perform the dharma of Inviting Buddha to Bestow Amrit 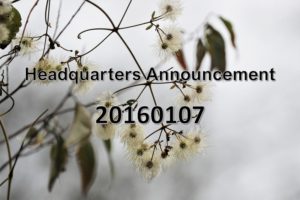 Wangzha Shangzun said the following in a meeting with holy and virtuous ones and high monks held at the United International World Buddhism Association Headquarters recently:

“Holy and virtuous ones must first possess the demeanor of a holy being. Humility, prudence, honesty, and selflessness are the most basic kindness in human nature, and benefiting living beings with great compassion as well as practicing the Bodhi way are the must-have cultivation qualities. But in the past several years, I have heard a lot of hearsay about some dharma kings, venerables, and rinpoches in the society spreading rumors by saying they could practice the Dharma of Inviting Buddha to Bestow Amrit. Novice people mistakenly believe it to be accurate, so they got deceived and take refuge in them. There was even some lady who asked me to invite Buddha to bestow Amrit for her.

I will state it clearly today. Based on my practice, I don’t even have one percent of the Dharma power to practice the Dharma of Inviting Buddha to Bestow Amrit successfully! Inviting Buddha to Bestow Amrit is the quintessence of the supreme jewel. Upon receiving the initiation of Amrit, one can attain the holy state in tangible form on the spot. As for extending the years of one’s life, it is only natural for it to happen. But unless a Buddha, a Marvelous Enlightenment Bodhisattva, or an Equal Enlightenment Bodhisattva, no one has the Dharma capability that can invite a Buddha to bestow Amrit!

I make the assertion here that no dharma king, venerable, or great rinpoche of any major sect in the world today has attained the ability to invite Buddha to bestow Amrit. Not one! I shall bear the causal responsibility for what I say!

As far as the Amrites that were invoked at the time when Imparting the Absolute Truth via Heart Sutra by H.H. Dorje Chang Buddha III was published, neither Gar Tongstan Jiaozun nor Kaichu Ruzun had the qualification to invite the Buddhas to bestow it. Gold Button Levels 1 to 3 cannot invoke the Buddhas, not to mention that the Blue Button levels are even far worse and not qualified. The Buddhas came to congratulate by bestowing the Amrites on that day. That was not caused by someone who practiced Dharma successfully. It was due to the Buddhas in the ten directions showing the causal conditions to prove the Buddhist book Imparting Absolute Truth via Heart Sutra is the impartation of Dharma by a true Buddha who is in our world.

Separately, there is the kind of Amrit called Dharma rain from flowers and trees (花樹法雨甘露), but that is poles apart from the real Amrit of pure quintessence and is not the Amrit truly bestowed by the Buddha. It is, at most, a manifestation by the Bodhisattvas in the space. Buddha’s true Amrit of quintessence must be given in a bowl, without one drop left outside the container. In the world today, other than H.H. Dorje Chang Buddha III, no other tremendously holy being has the Dharma ability to perform Inviting Buddha to Bestow Amrit. Whoever says that they can invite Buddha to bestow Amrit is lying and cheating. Alas! H.H. Dorje Chang Buddha III, being able to give Amrit, denies that He has the ability. The Buddha who can do it has denied it, yet the ordinary people, on the other hand, are bragging and cheating. It is truly miserable!

Among all the great holy and virtuous ones and the high monks who are sitting here today, and all the great dharma kings, supreme dharma kings, and venerable ones in the world, no one can invite Buddha to bestow Amrit, no matter from whom that person is certified to be reincarnated! If there was one person that could do it, can you point them to let me, Wangzha, check them out? If they could have the Amrit bestowed, then I shall prostrate myself to them, lower my head, and call myself a disciple to them. If one cannot even have humility and prudence but only brag vaingloriously and pompously, how could one possibly have Amrit bestowed? If they keep talking nonsense carelessly, then they can only be destined for hell.

You must pay serious attention from now on. The only determination of whether someone is holy or ordinary is to see what levels of the robe that someone is wearing and checking them against the 128 evil and erroneous views for the correctness or evilness of their understanding! Otherwise, you are bound to fall prey to deceit!”